We first learned that the domain name market was far from stable around eight years ago when the dotcom crash turned a booming market into dust in just a few months.

Over the years, that market has grown in strength: its stability saw people invest in advanced systems for buying and selling domains, and the never-ending demand for Internet sites, coupled with the fact the the number of top-level domains stayed the same and so the domain space became smaller, meant that prices increased steadily to the point where tens of thousands of domains became worth tens of thousands of dollars. 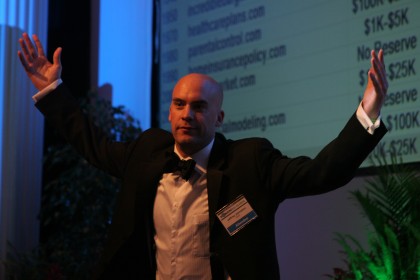 Well, the DOMAINfest domain auction has just demonstrated that the domain name space may be more stable but it ranks alongside art, rather than houses, when it comes to property.

In short, the auction was a bit of a wash-out, with none of the 200+ domains available exceeding expectations; most hitting the bottom-end of their estimated value; and a very large number meeting no bidders and being pulled off the floor.

The big names were especially badly hit: zimbabwe.com was slated for $100,000+, no one would touch it and it went unsold. Monalisa.com – possibly frivolous but clearly memorable – also went unsold. Rather worryingly for the blogging community, weblog.com – a snip at $500,000 – has very solid traffic – 700,000 visitors every month. It went down to $200,000 and still failed to sell*.

Strikingly, sleep.com – a domain I wouldn’t mind having – went unsold, failing miserably its $1 million to $5 million price tag. Screensavers.com – which purportedly has made more than $13 million in revenue and boasts 5,000 downloads per day – did slightly better and was sold for $800,000. 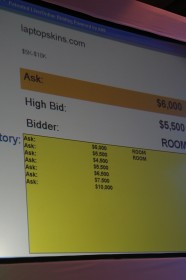 So the big spending is out on domain names. But how about the smaller fish – the day-to-day businesses?

Well, they fared better, but no one was leaving with a windfall today. The exceedingly well-priced fly.travel went for a measly $2,500 – with the auctioneer practically pleading with the sole bidder. I nearly bought it myself. Inventions.info – which strikes me as a good long-term bet – went for just $1,250, but at least that was within its expected range.

The “.me” domains – which are currently being extensively marketed following the registry’s purchase last year – did better than expected, but I still think that $10,000 for contact.me is going to be widely seen as an incredible bargain in just a few years’ time.

All that said, there was still a lot of money flying around for what remain largely intangible names on an invisible network. No one believes the Internet is going anywhere soon – and .me’s comparative success shows that marketing breeds confidence – but now is not the time for flashy auctions it seems.

kieren I’m pretty sure weblog.com did NOT get picked up at 250k . You sure about that one ? We have it listed as a “pass”

The full results are here:
http://www.domainnamenews.com/domain-auction/domainfest-global-premium-live-auction-results/3864

@ Adam again: You’re right – thanks for the catch. I’ve fixed it above and linked back to your comment here – Kieren.