Twitter wins the battle, now journalists and politicians need to win the war

Delighted to wake up this morning to find out that people acted on appalling press gagging regarding Trafigura and had used their collective voices to flip things over. 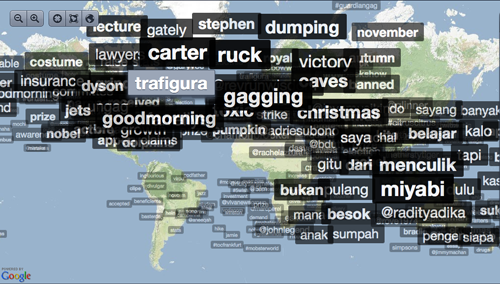 Much of the credit is going to Twitter so it is fitting that Guardian editor Alan Rusbridger twittered himself about the “victory” when Carter-Ruck solicitors backed down at the last minute (just an hour before a court hearing questioning the Draconian court order restricting the newspaper from reporting questions asked in Parliament). Soon after, Rusbridger thanked those that had used Twitter to bring attention to the issue and for their great support.

I could go on and on about Twitter – everyone else has – but while this is a very interesting development in modern communication, ultimately the only thing that Twitter brings to the game is speed. I had never heard of Trafigura before yesterday, and this morning, when I went to type it in the company’s name to find out what had happened overnight, I found myself hard-pushed to remember its name – it was traffic-something.

This whole episode was certainly a victory for freedom of speech but it is but one fight is a very much larger war that it is up to journalists and politicians to tackle over a longer timeframe than 24 hours on Twitter. No one will remember Trafigura in even a month’s time. But in a month’s time there will be nothing to stop a firm like Carter-Ruck from doing exactly the same thing all over again on a story that doesn’t garner as much attention.

As the Guardian’s technology editor Charles Arthur also twittered – if the Parliament website didn’t exist and didn’t post the MPs questions, no one would have been any the wiser that this whole thing happened.

The fact remains that a single company was able to silence the entire UK media and prevent it even talking about events in Parliament for a sum of money – the amount it paid to Carter-Ruck. How much does it costs to gag the two pillars of democracy? That’s hard to pin down because it was part of a much bigger campaign but I would guesstimate £100,000 – focused in the right place and with skilled practitioners of course.

This should never have been possible. No gagging order should ever have been approved. The Guardian shouldn’t need to go to court to argue against it. And it shouldn’t take hundreds of thousands of outraged citizens collectively shouting to pressure a company to withdrawing an order. This is a systemic problem and it needs to be fixed.

I see the Liberal Democrats are calling for a debate on this issue – press freedom and libel laws. But will they get the support they need from Twitter-citizens in order to make that debate happen and then to force changes on a legal system very, very resistant to change? I doubt it – I’ve not seen more than a handful of people tackling this wider point or asking people to email their MPs to keep the pressure up (answer: go to They Work For You).

Very few people are in this for the long-haul: they appear when outraged, then don’t stop until people back down, and then they expect the professionals to get on with making sure it doesn’t happen again.

So what are the ways in which this issue can be dealt with? I see several:

This path has already been flagged by the MP at the centre of the recent argument. Along with the main question about Trafigura, Paul Farrelly also asked: “To ask the Secretary of State for Justice, what mechanisms HM Court Service uses to draw up rosters of duty judges for the purpose of considering time of the essence applications for the issuing of injunctions by the High Court.”

To prevent these sorts of orders in future you have to look at how they are approved. This gagging order should never have been approved. And it is NOT sufficient that someone can go to court to get it overturned. This idea of approval and then appeal makes sense to the legal profession but it does not work in reality. It is being gamed to the detriment of society.

The legal profession really needs to face up to the fact that the last 10 years of court actions against journalism has not improved the situation; it has made it worse. I would like to see some legal journalists starting to pressure lawyers and judges into debating this and overhauling libel laws in the face of the modern world.

Everyone likes to beat up on politicians but they remain the people’s representatives and they are the people who write and rewrite laws. This is a difficult subject – which means that unless there is a groundswell of support, and several champions of the cause – it will eventually be dropped by MPs.

But if it becomes a topic of public focus, if votes start coming into the equation, and if there are enough MPs who see and understand it is their duty to have these debates and to make real change for the betterment of the country, then you could see real change.

The press itself needs to organise and work together and make this an issue in the public’s eye. If there is one thing that newspapers in particular and really good at it is taking an issue and running with it.

It needs to be broken down into understandable chunks, people need to be kept engaged, informed of milestones and action points, and there has to be constant effort and resources put behind finding more permanent solutions than Twitter-victories.

Newspapers are currently so enamoured with Twitter and blogging but I wonder how many of them have any understanding of how to harness that power. Do they have any idea how to engage those people that came to their support today? Do they know how to build a campaign with people, rather than just inform people of their campaign?

I’m not sure they do. I might have to see what I can do about that.