It is with some inevitability that the British press this morning launched into a huge anti-Nick Clegg attack – but all the same it is sobering to see it in reality. 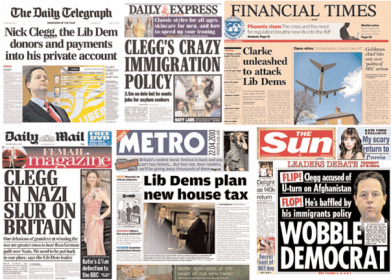 As leader of the Liberal Democrats, Nick Clegg has set the UK election on fire following the first ever televised debate of political leaders, where he came out of it looking like a politician who may have a fresh approach, and the old Labour and Conservative figureheads looked like the same people saying the same things that the British people have had for the past 30 years.

Clegg leapt in the polls and although there is no way the LibDems will enter power, it does put them in an extraordinary position given the split across the country between the other two parties.

What today’s papers highlight starkly however is that the British newspapers (with the exception of the Guardian and Independent) look just as old, out-of-date and mired in old-world politics as Gordon Brown (Labour) and David Cameron (Conservative).

The headlines are so ludicrous, the charges so trumped-up, and the attack so mindlessly biased that it lays bare what the papers have always been – mouthpieces for powerful men. But what those power-players have forgotten is that newspapers also need to be in-step with society and reflect people’s views and attitudes rather than so transparently trying to manipulate them.

And the reason that this manipulation is so stark this time around is thanks to the Internet. The Internet brings with it a culture of openness and transparency. It also allows millions of people to communicate directly without having to go through the filter of the media.

When people watched the first leaders debate, a very large percentage didn’t turn to the TV or newspapers afterwards to find out what others thought – they looked online, at Twitter and on Facebook and on blogs to see what people thought directly. The commentary that the very few media professionals would usually provide was replaced with the hundreds of ordinary individuals out there commenting – and the comments that resonated with people were repeated by the people themselves.

This ability to work outside media and to lift free from media manipulation is particularly clear in the fact that the hashtag #nickcleggsfault is currently the number one topic on Twitter in the UK and in the top five globally.

It the instinctive reaction of thousands of people who see the old-school media’s manipulation for what it is, and decide to take revenge in the most effective way that you can against powerful people – through mockery.

Currently Nick Clegg is being blamed for everything from wetting beds to the Icelandic volcano explosion to people being tired to bad computer updates. It is an extraordinary sign of people grouping together and reinforcing their own beliefs – in this case that the newspapers have gone too far, that they’re out of date and out of touch.

I don’t think we will see this kind of political attack – at least not such a blunt, unthinking attack again. By the time of the next election, the media will have learnt that the rules have changed. It’s a small but sweet step in the direction of a truer democracy, with power spread thinner and wider. And I’m pretty happy about that.

Good column Kieren, I was thinking something similar myself.

Big question is: how big a proportion of the Twitter generation are registered to vote and will actually show up at the polling station?

You can see the change coming, but the reality is that politics is a numbers game and online/social media is still only getting small percentage of overall voter eyeballs.

Is that percentage enough to tilt elections of individual MPs? I think it’s on the edge in quite a few places – and that is what the big power players are really fearful of.

My prediction here: the LibDems will get a high percentage of votes and pick up roughly double the number of MPs, making them a real third-party force, but leaving them far from actual power.

They will then argue strongly for proportional representation – something that will get alot of support – but ultimately be shelved by the Tories and Labour in Parliament.

Of course, alot of this is dependent on the debate tonight. If Clegg really pulls something out the bag, when then things will get interesting. But I doubt it will happen – nothing focuses a politician’s mind like losing – and Brown and Cameron, no matter what you think about them – are serious politicians.

And they are going to go for Clegg’s throat. I just hope the LibDems have got in some hardcore media trainers to prep Clegg for what’s coming his way.

A better opinion article on the LibDems and their rise is at http://www.guardian.co.uk/commentisfree/2010/apr/25/liberal-democrats-nick-clegg-conservatives.

He’s just another politician in many ways!

@David: Afraid, I’ve got to disagree with you there. I think Nick Cohen’s column is a mess.

Like the very journos he refers to in it, he doesn’t know anything about the LibDems, and so just throws a bunch of unrelated information at the problem in the hope of finding some contrary answer.

And Carr’s piece doesn’t offer much either. Of course Clegg is just another politician. Every politician is another politician. What is remarkable is that he can hold his own against Brown and Cameron, and their respective political machines in the middle of an election.

So yes he’s a politician but he’s a bloody good one. And people are sick of having bad choices.