Self-evaluation paints picture of Board at odds with itself

A self-appraisal of the ICANN Board has just been posted on the organization’s website.

In it, Board members rate 89 different measures of their own performance according to a seven-measure rating from “strongly agree” to “strongly disagree”. Unfortunately, despite plenty of figures in the documents, there is zero analysis of what this all means, so I have gone through them and prepared one.

What is striking from the self-evaluation is how ill-at-ease the Board is with itself. You can see a spread of all the averages on particular topics in a graph below. The median is 4.6 which comes between “Neither agree nor disagree” (rated 4) and “Somewhat agree” (rated 5). 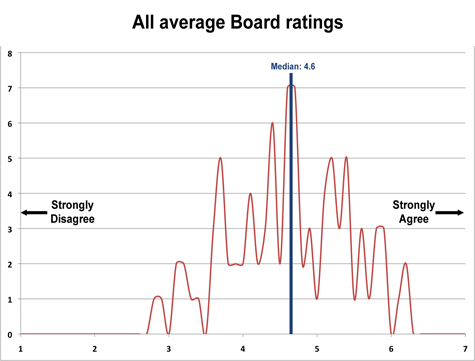 I would expect a healthy Board, especially one whose main philosophy is to build consensus, to average out around 5.5 – between “somewhat agree” and “agree”.

But this graph only tells half the story – the real problem appears to be that the Board strongly disagrees with itself. If you look at the variation in ratings between different Board members, you see an extremely high level of disagreement.

In no less that 35 percent of cases, the Board put forward views at opposite ends of the spectrum. And in 44 percent cases, it disagreed heavily. What’s more, there was never clear agreement on any topic. The closest it got was 50 percent agreeing with a given statement. 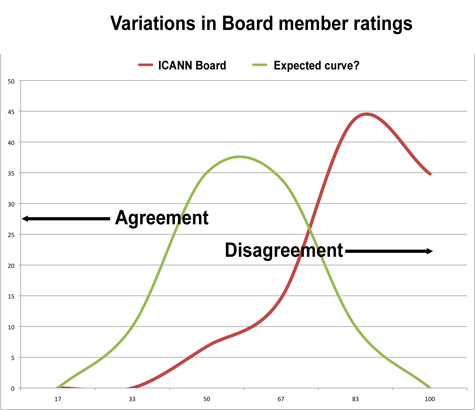 You would expect a graph of variation of views to adopt the classic median curve – with the bulk of the responses in the middle. But as you can see above, there is a very strong sense of internal disagreement.

Looking at the extremes i.e. low average agreement with a statement, what stands out again is that the Board is not forming a very coherent whole – and that it is aware of it.

The lowest rating of 2.8 (just below “somewhat disagree” – and remember, this is the *average* rating) was given to the “Board performance shortfalls” statement: “The board effectively addresses shortfalls in collective and individual director performance.”

Similar low ratings were also given by the Board to the Board’s own behaviour. “The board spends the right amount of time discussing and reviewing strategic issues at meetings” received a 2.9 rating. It beats itself up again with a 3.1 rating for: “The board rigorously evaluates its individual and collective performance at least annually and uses the lessons learned in plans to improve board effectiveness.”

What is the reason for this dissatisfaction? It would appear to come out in other low-rating comments.

“The board regularly discusses and plans succession for the chair and members.” A 3.2 rating. This would appear to be a result of ICANN’s unusual structure where Board members are constantly rotated.

The Board also doesn’t feel as if it is playing a sufficient role in the organization’s strategic direction. “Major board decisions during the year include full discussion of alignment with strategy and explicit consideration of alternatives” – gets a low 3.3 rating.

And the Board appears to feel this is partly the staff’s fault. “The board and management share a well explored, unified vision of the future of the organisation and how to achieve it” – gets a 3.3 rating.

Is there a communication breakdown between staff and Board? Members seem to disagree with the statement: “The board has agreed procedures for communication between directors and management outside board meetings, requiring the knowledge and agreement of the Chief Executive and, where appropriate, the Chair” (3.7).

The Board is not getting information in the right way at the right time: “Papers (agenda, minutes, outstanding actions, reports and recommendations) are concise and received in good time for board members to prepare properly for each meeting.” (3.4).

And its meetings aren’t very good either. “Meeting agendas prioritise important matters and assist balanced discussion of strategic, performance and compliance issues” (3.7); “Meetings are conducted efficiently and to schedule, but provide sufficient time and encouragement for members to discuss issues that they deem important.” (3.7).

So if Board performance, staff communication and strategic discussions are the Board’s self-acknowledged failings, where does it feel it is doing a good job?

The answer appears to clearly be: financially.

The Board also feels that it is acting “the best interests of the organisation” (6.2 rating – just above “agree” but below “strongly agree”).

And it is happy with the CEO (“The chair has a constructive working relationship with the chief executive” (5.9); “The board trusts and shows confidence in the Chief Executive” (5.8)).

Considering the clear levels of disagreement demonstrated, Board members are happy with the ability they have to raise issues (“All directors are given the opportunity and encouraged to contribute to the board’s decision-making” (5.9)).

So is the problem with staff? Well, the Board appears to feels that it is not to blame. A 5.9 rating for the statement: “The board encourages the Chief Executive and other key management to be candid and constructive in raising issues with the board.”

So, overall, what does this demonstrate?

There is a very high level of disagreement within the Board, which could point to disenfranchised members.

Of course, much of this discontent could be put down to the peculiarities of the ICANN Board – the negative impacts of which were pointed out very clearly in the independent review of the Board by the Boston Consulting Group.

There are too many Board members – making coherence extremely difficult, especially when the members come from such a wide range of backgrounds. Meetings with 21 people are also never efficient.

Add to that the fact that the Board members are constantly rotating. And the voluntary, unpaid nature of the job.

And then there’s the fact that the staff continue to lack proper summary and analysis skills, and so everyone from Board to community is swamped with information. (And you need only look at the enormous glut of information released today in time for the Brussels meeting deadline to see that continues to be a major headache.)

There is also a striking absence in all of this self-evaluation. There is no mention or review of the community itself. One of the biggest issues that exists within the ICANN model is that the Board is representative of a broader community but that the community itself frequently feels as if it is shut out of the crucial decisions and discussions.

The fact that the Board doesn’t self-evaluate itself in terms of the community is a worrying gap, and one that it would do well to review for 2010.

But if the Board and the community are to take away one thing from the Board’s own self-evaluation, it should be to re-read the Boston Consulting Group’s review of the Board published in November 2008.

That report (Executive Summary [pdf]) made seven recommendations, all of which would appear to go some way to fixing the issues that the Board itself has now recognised, albeit indirectly. Those recommendations were:

If those seven recommendations were implemented then maybe would we see a Board less unhappy with itself and so more able to do the difficult job it has been tasked with.

Thank you. This is as interesting as the IPC/ISP/BC vote correlation at Paris as a fundamental.

Kieren, I’m surprised that you’re surprised that the Board disagrees with itself. The Board was carefully constructed so that all of ICANN’s sub-groups have representation on the Board. In a sense, it is a microcosm of the community. Since every group is represented, of course all points of view show up in the survey responses.
That is also why it is not necessary to ask the Board how it relates to the community. The members are put in place by the community.
Conspiracy theorists might want to keep that in mind so they can offer their preferred candidates when Board elections come around.

I’m not at all surprised that the Board disagrees with itself, especially having been on the receiving end of a diverse community all with strong views.

But I don’t think that’s what this self-appraisal shows. It is understandable that the Board would disagree on particular topics or issues – and I think people expect that.

But this self-appraisal was about the Board itself and its functioning – and I think it is surprising that there was such little agreement within the Board over that.

In other words, while the Board is likely to disagree over specific issues, you would think it can at least agree that the way it works to reach a resolution is either optimal or sub-optimal. In this case, however, you had some Board members saying everything is working wonderfully, and others saying it wasn’t working at all.

I think it’s the lack of coherence that is peculiar. Usually people can agree to disagree. It seems that in this case the Board disagrees that it disagrees.

Re: conspiracy theorists – I’ve not seen any of that in this case. In fact, the conspiracies appear to be dying down with the production of documents like this. Openness breeds confidence.

And in this particular case, I think the really useful thing is that the Board itself appears to have reached the same conclusions as the Boston Consulting Group – hopefully this reinforcement will cause some of the recommendations that have languished to be picked up again.

While you’re here Scott – what’s going on with that masked man on your ICANN blog post? Who is that? Rob? Anyway, gave me a laugh. All the best – see you next week in Brussels for a beer I hope.