Beckstrom: You are not a pipe 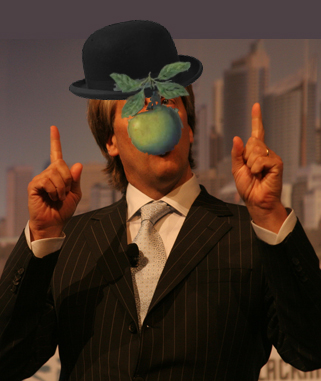 ICANN CEO Rod Beckstrom gave a defiant opening speech at the opening of the organization’s meeting in Brussels.

Answering accusations that the organization is ignoring its own accountability processes, that the staff and Board have insufficient checks on their work, and that he himself had overstepped the mark in comments he made to governments at the last meeting in Nairobi, Beckstrom was unapologetic.

“Much has been made in the media of ICANN’s consideration of the application for a dot-xxx top-level domain, which the board will address this week,” he acknowledged, before repeating the assertion that caused much of the trouble: that the decision, made by an independent panel, was “non-binding” on the Board.

Instead, Beckstrom pointed, rather weakly, to how he had “been struck by the transparent way ICANN is dealing with this controversial issue”.

Transparency – and accountability – are hot topics in ICANN at the moment, especially with an independent review team containing the US Commerce Secretary looking at the organization specifically on these two issues.

That team has just started its work but already Beckstrom appeared to make it clear he was prepared to ignore their conclusions if he didn’t agree with them. Pulling a quote from a 2007 report by the One World Trust, he pointed out that ICANN “is a very transparent organization”. But it is still improving, no matter what others may say.

“We recognize the right of the Review Team to publicize their views,” Beckstrom pre-empted. “But we also recognize the sizeable challenge they face – as a group that includes interested industry stakeholders and contracted parties – in attempting to produce an objective and independent report that the board and community will find useful.”

If that wasn’t clear enough, he repeated the message. “We are certain the Review Team will find areas where they believe further improvement can be made.” But? “But we stand on our long record of pushing the edge to make ICANN as transparent and accountable as it is possible to be. We welcome constructive help and call on the community to join us in embracing this commitment.”

The inspiration for this refusal to accept external criticism? Rene Magritte. “Surrealist artist Rene Magritte had a unique view of art and life,” Beckstrom mused. “Magritte famously painted a picture of a pipe and wrote on it ‘ceci n’est pas une pipe’ – ‘this is not a pipe’.”

What has this to do with administration of the domain name system? “There’s a lesson there. Challenge assumptions. Question what you see.”

Certainly people have questioned what they heard when, a few months ago, Beckstrom created a firestorm by telling the Governmental Advisory Committee that the DNS was in a precarious state and was under attack as never before. The comments sparked a furious letter [pdf] from the head of one of ICANN’s arm – the ccNSO – claiming that they had the “potential to undermine effective and productive relationships” and calling his remarks “alarming”. A second warning letter [pdf] was also sent by the Internet Society’s president, scolding Beckstrom and pointedly asking for facts to back up his assertion.

Beckstrom’s response to the public slapdown? “You may disagree with what I said, and openness to different viewpoints is what makes our community strong.” Why did he say it? “I said it because I believe it is the truth. And more than twenty years of experience in risk management have taught me that in addressing highly complex systems, it is better to be more concerned about risk than less.”

Having been asked for facts to back up his statement, he threw the issue back at the community asking them to come up with information.

This defiance is a marked departure from the previous CEO – who is at the conference – who always tried to avoid conflict, particularly in public. It is also a risky strategy in an environment that spends much of its time trying to get people to agree with one another.

It seems the Beckstrom honeymoon is over. Now, as all previous ICANN CEOs have discovered before, he is going to have to earn his money.

SURREAL is certainly a good word to describe ICANN.

Consider most companies that have to struggle to generate revenue, contain expenses, and survive competition to play another day.

That is not the case with ICANN. Instead, cash flows in from their various incumbent ?”supporters”?. ICANN then works hard to dream up ways to spend that cash. They also work hard to keep people from noticing that SURREAL situation. Distractions are a key to keeping the public looking the other way.

Beckstrom, Twomey, Magaziner and the Clintons are not Internet Netizens. They are Surreal.

Your comments really have nothing to do with the posts above them.

Please resist the urge to go off on unrelated diatribes. My finger is constantly hovering over the delete button when I see your name.