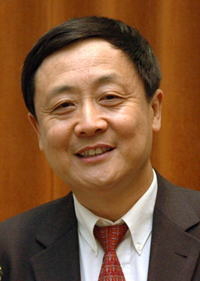 Missed this last week: the Internet Society (ISOC) has handed out its annual Postel Award, which honours those who have made outstanding contributions to, broadly, the Internet.

The winner this year – awarded at the IETF meeting in Maastricht on Wed 28 Jul – was Chinese technologist Dr Jianping Wu (left). Dr Wu received the award for “the pioneering role he has played in advancing Internet technology, deployment, and education in China and Asia Pacific over the last twenty years”.

Dr Wu developed the China Education and Research Network (CERNET), the first Internet backbone network in China. It has since become the world’s largest national academic network. He has also been building a large-scale native IPv6 backbone in China. IPv6 is a crucial but complex expansion of the current Internet system and it is large-scale rollouts that are making it possible to shift the Internet onto these new networks.

ISOC President Lynn St. Amour had this to say: “Jianping Wu has dedicated his career in China to developing a broadly accessible Internet that brings people together. Twenty years ago, Dr. Wu recognized the importance and future impact of the Internet and the pivotal role it would play in terms of its impact on social reform, technology advancement and economic growth for China. He has worked tirelessly to bring his vision to life. As a result, the networks that resulted from his determination and hard work have played an important role in driving Internet development in China and have had a significant impact on the Internet worldwide.”

Dr Wu recorded an acceptance video for ISOC, which it has stuck on YouTube and I’ve embedded below (note: the sound is very low and not great).

The Postel Award is named after Jon Postel – one of the key figures in the Internet’s development who died in 1998. The award was started in 1999 and has been awarded to the biggest names in the Internet infrastructure world, although very few people outside that world will have heard of them, they have all been crucial members of a loose community of engineers, policy-wonks and assorted others who work to make sure that the Internet works in an open way.

If you win, apart from having done the world a service, you get a presentation crystal and $20,000. You can find out more at: http://www.isoc.org/postel/.

Olaf described that IN-ADDR.ARPA is currently being operated by
ARIN and that there are plans in development to move the
function under IANA. He had recently discussed the move with John
Curran (ARIN President), and the board discussed coordination that
might be needed with ARIN and IANA in order to properly structure
the transfer.

@TheBigLieSociety: It’s pretty ridiculous to equate an individual – especially one that been given a prestigious award – with a country.

Not sure that .arpa is worth getting that excited about either to be honest.

As an ICANN expert one would expect you would understand the value of /8s and IN-ADDR.ARPA domains.

BTW, How did AT&T obtain 32/8 directly from ICANN without an RIR while you were at ICANN?
http://www.iana.org/assignments/ipv4-address-space/ipv4-address-space.txt
032/8 AT&T Global Network Services 1994-06 LEGACY

Also, what happened to David Conrad?
and Doug Brent is still there?

Why do I get the feeling this is Jim Fleming or someone similar that I have previously blocked from posting their conspiratorial nonsense on this blog?

Go bug someone else please.