IGF Day 1: The sound and the fury

Vilnius is the capital of Lithuania. And Lithuania is north-east of Poland and underneath Finland.

In an exhibition center on the outskirts of Vilnius, over the Neris river from the big, beautiful Vingis park, are currently the 1,000 or so people in this world who spend their lives obsessing about Internet governance. I’m one of them.

This is the fifth annual Internet Governance Forum – IGF – and the last under its current mandate agreed by the United Nations. The forum is going to be extended for at least another five years but we’ll all be pretending we don’t know that until the last day when the “Taking stock” session takes place.

Here are some things you need to know about the IGF:

Lithuania is not a rich country – that much is obvious when you drive through it; even more so when you walk around the local neighbourhoods. If you’ve ever been to a post-Communist European country, you’ll know exactly where I’m coming from.

But in that way that poor countries with rich neighbours have, the locals on the periphery of the IGF meeting clearly felt certain that they could massively over-charge and no one would notice.

To get to “LitExpo” you really need to get a bus or a cab – it’s too far to walk. And so the hosts have – as they always do – put on a shuttle service. The only downside is that have decided that the price for the week should be 75 euros – which is a huge sum – around 260 litas – in the local money.

Depending on the cab driver (and it really does depend on the driver himself), a ride to the centre costs between 10 and 50 litas. So even if you were unlucky, you would find that getting a cab every day still works out cheaper than the mass coach transit on offer. Oh, and the shuttle coaches run only twice a day from your hotel – once very early in the morning and once after everything is over.

Of course, people being what they are, the majority has paid this stupid price.

And the second rip-off (so far) – 36 litas for lunch. They have you confined in the exhibition centre (and there is not so much as a sandwich cart within a 20-minute walk), so let’s get everyone to pay $13.50 for a bog-standard lunch. This is just an annoying con for people like me, but for those from developing countries, it is cripplingly expensive.

I predict some very angry exchanges in the next week.

While I’m having a moan – the acoustics are terrible in most of the meeting rooms. This is because LitExpo is an exhibition hall. So in creating the separate rooms, they have just put up tall exhibition walls – you know, one-inch thick cloth-covered walls. And no ceilings.

So for about half of the meeting rooms you can hear – very loudly – what everyone else in the other room over the hall is talking about (albeit slightly garbled). So, of course, the people in your room either talk more loudly or turn up the PA system.

So the other rooms do the same. And before you know it, we’re all yelling at one other trying to be heard. This is not conducive to reasoned discussion. In fact, I think it can be safely summarized as infuriating. 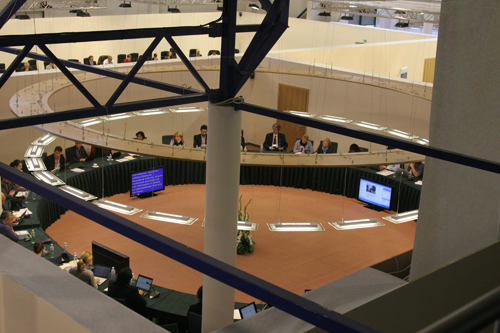 I can see you (and hear you, unfortunately)

I’m going to add one more pseudo-moan. Lithuania, it seems, offers exactly what you ask for – but not anything beyond that. This leads to some interesting situations – two of which are apparent in my hotel room.

I have a coffee cup, and a packet of coffee and milk in my room. But no kettle. Clearly someone previously asked for coffee in their room. And they got it. Maybe it was two people – maybe the second person, seeing the coffee, then asked for a cup and some milk (well, creamer). What they forgot was to ask for something to provide hot water.

Is it now contingent on me to push the envelope further and ask for a kettle to contain and boil the bloody water? I’m not sure – this is a strange land. I fear I may push it too far and lose the cup in the bargain.

The other thing is the huge bathroom. Really big. The kind of shower you want at home – so much space that you can walk around in the shower area. Luxurious. And that’s only a third of it – big bathroom space, and space for the sink and the toilet.

This is great. Except the bathroom is actually the same size as the rest of the room. Which is a bit odd when you come out of the super-bathroom and feel cramped in the actual room. Clearly the architect insisted on a big bathroom. He just forgot to add that he wanted the room itself to work in the normal 1:3 bathroom-to-actual-room proportions.

I also have a desktop PC with screen, keyboard and mouse on the desk. I haven’t fired it up but I already know from the look of it that I had a better computer when I left university – and that was 15 years ago.

Still, it’s the thought that counts.

Even though this is the IGF, ICANN politics are never far from the agenda. So in a session about IDNs this morning, we were treated to, frankly, a rant from Jamil Zahid – who I actually like very much – who horribly mispresented the issue of top-level domains for developing countries and promoted an IP lawyer delay-and-destroy argument as coming from a developing country concern perspective.

Fortunately ICANN chairman Peter Dengate Thrush was in the room and tore into the dodgy and fear-mongering arguments. But it was a depressing sign that the combatants in ICANN will do anything and go anywhere to get a leg up.

So the Gala event this evening was at the Vilnius Modern Art museum. It was a pretty peculiar affair.

I can’t fault the locals on the food or booze – there was plenty of both. But how come the art museum had basically been stripped of any art? A few statues were carefully clumped together and surrounded by tape barriers and the rest were presumably put in storage before the guests turned up. Which meant that we all basically had a drink in a big white warehouse.

Inevitably it came to the speeches. Why local dignitaries insist on giving speeches at social events is completely beyond me. It never works, and it just frustrates those giving speeches. Especially in the Internet world where people have a peculiar tendency to keep talking – loudly – even when asked politely many times not to.

I have always been in two minds whether I love or loathe this.

On one level, it is extremely rude to talk loudly in the same room as someone giving a speech. And to keep on talking when asked to be quiet (especially when there are plenty of other rooms to go to).

But on the other hand, this conference is about the Internet, not about giving politicians yet another platform to bore everyone to tears. When it’s going on, it feels a little bit like the Internet itself – lots of people trying to be serious and share information, while being drowned out by people who don’t give a shit.

In this case, however, it was actually the prime minister of the country, Andrius Kubilius, trying to speak. You’d think that a prime minister in his own country could command a bit of respect. But no. Anyway, he took it well. To become prime minister you known he’s already been in worse spots. 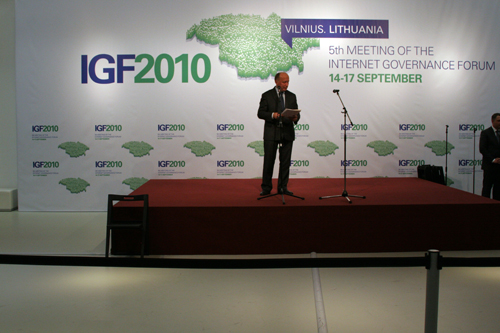 The prime minister speaking to a packed and attentive audience

What was kind of sad was that someone had written a whole speech for him, including frequent references to the recent win by the Lithuanian basketball team – a BIG deal in this part of the world. The rousing speech fell on deaf ears. Most people didn’t know who the guy was on the little stage. That’s the Internet crowd for you.

Now if he’d told a couple of jokes, or make a cat dance, well that would have been an entirely different matter.

Sounds like there’s plenty going on. I just wish I could work out exactly what the IGF is for (other than giving various NGO gravy trainers a nice paid trip to Lithuania, which I know from experience is very nice).

Lithuania is a country south of north-pole and north of south-pole ?