IGF Day 2 and 3: Silence the Lambs

If you were to list Internet conferences in terms of boredom, the IGF would come mid to top-table.

It doesn’t have the razzmatazz or micro-celebrities of Web2.0 conferences but then it also doesn’t suffer the long, drawn-out pondering of intergovernmental talk-fests.

That’s why it’s so important that the Critical Internet Resources main session at the IGF is a hotbed of intrigue and barely disguised fury. Without this session getting the blood going, attendees may not make it through the remaining three days.

But, sadly, this time it was not to be. On a quick straw poll, the session – which is even codenamed so that the word “ICANN” doesn’t appear on big screens and send people into a frenzy – was mostly described as “slightly dull”. How can this be?

The sad answer is: high-level politics. Usually what happens is some government delegate, typically from China or Saudi Arabia will get up and start denouncing the current systems as unaccountable, or tightly controlled by the US government, or some variation of this theme. Often they’ll helpfully misrepresent reality, which then fires up someone else – usually American – to get up and start crowing back. And then, as they say in the States, it’s game on.

But the touchpaper was never lit yesterday. Why? Because there’s a bigger game on the horizon: the whole future of the IGF is up for discussion between now and the end of the year at the United Nations, plus the ITU Plenipot next month in Mexico requires all governments to keep their powder dry so they can make deals.

So they said nothing at all. I’m not sure they even turned up to see what others said. Once firestarter who was there, ICANN’s CEO Rod Beckstrom, didn’t move from his chair. Moderators Chris Disspain and Jeanette Hoffmann were so surprised at the lack of fight that neither of them even noticed giant insects had settled on their faces. 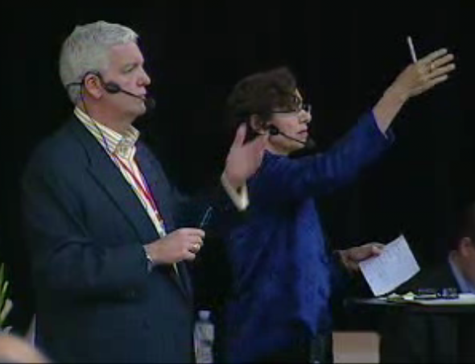 High-level deal-making is like catnip to government representatives. Which is why, whenever people suggest the IGF become a decision-making body, wise heads always say “don’t do it”. As soon as the forum becomes something where deals are done, you can expect to never see government representatives at a microphone, except when announcing the deal they just struck in private. Sometimes not even then.

The problem is that without some kind of solid outcomes from the IGF, it will be increasingly difficult to keep people interested and for people to get funds to attend. It’s very hard to explain to people that they need to use limited resources to send you halfway across the world in order to have a chat.

So where lies the balance? No one knows – and with people likely to fight over this point right up to the end, a system will probably have to be developed at high-speed and so will be a dog’s breakfast.

So following my rant about the shuttle buses to and from the venue being a complete rip-off, on the second day it was announced (through posters stuck on windows near the exits) that all shuttles would henceforth be free.

And so the first mini-controversy of IGF 2010 was solved. It’s these sorts of issues that explain the bags under the eyes of the IGF staff on the third day. I’ve no idea whether those that handed over their 75 euros were reimbursed, or where the money is now coming from, but it’s good to see that the IGF maintains its friendly and open approach.

Since the IGF Secretariat is far too diplomatic to talk about sorting the situation out, I think I’m going to claim credit. So if you are in Vilnius and would like to thank me for saving you a chunk of money, I’ll be the bloke in the blue suit getting into a cab at 6pm outside the blue gates.

It’s the wrong thing to do, but someone has to say it: the collective wisdom of teenagers – or “youth” as they are being called– don’t amount to squat.

Maybe it’s because I’m not a father; maybe it’s because I am still young enough to understand the latest uses and trends of the Internet; maybe I’m just a grouch; but the strange habit of sticking a 15-year-old at a microphone to mumble useless insights about the Internet just doesn’t cut it.

Yes, it is a nice change from the “old white men” who are also mumbling useless insights about the Internet, but let’s not pretend we’re getting anywhere with this information. And you’re talking to an ex-precocious teen.

If we will want to instill some energy in the IGF – and god knows it needs it – why not remove the stages, tables, huge rooms, tired, over-long meeting formats, and pick up the pace of discussions?

Why is the energy so low?

Talking of which, there is a general sleepiness about this IGF. I can’t quite figure out why, but there is none of the usual energy here in Vilnius and it feels a little, well, dreary.

Compare this to the buzz that was there at the first IGF in Athens. It was total chaos but it was jumping. Rio was also fun. Sharm El-Shiekh had its moments. But so far in Vilnius – and there’s only one day left – it looks and sounds like a bunch of people talking not very interestingly about the not very interesting subjects.

Has the desire to bring people closer together – stopping civil society from yelling at Chinese delegates for example – actually caused us to all become dull?

The most exciting moment at Vilnius happened this lunchtime in the main session when a previously unannounced session appears to talk about the future of the IGF. Suddenly people were in the room, energy was up, people were modulating their voice, the pace was moving along.

And the exciting result? That one UN group is going to create a working group to spend six months talking about how to improve the IGF so it can be given to the UN to discuss in 12 months time. We may see the results in 2012.

Now I’m an Internet governance geek, I really am, I sat through late-night meetings in boiling hot rooms, starving and thirsty just to find out the latest twist, and I loved it. If I can’t get excited, then we really are buggered.