ITU Plenus Potens: Locked in a room, locked in time

The International Telecommunication Union is a walking contradiction.

I’m here in Guadalajara, Mexico at the organisation’s Plenipotentiary – a meeting it holds every four years to decide the strategic direction of the ITU.

Here’s what you need to know about the “Plenipot” first off: it goes on for three weeks. Yes, three weeks. It used to be four. The first week is taken up entirely with electing new officials; the second week is used to spread out and discuss the papers that have been provided to the conference; and the third is about refining the details and getting them approved.

If this sounds like an arcane way of doing things in the modern world, it’s because it is.

The clue is in the title – Plenipotentiary comes from Latin: plenus and potens meaning full and power. Government representatives (and no one else, mind) are given full powers to negotiate on their country’s behalf and at the end what is decided has full power on the countries represented (more or less).

Of course this approach was much more useful in 1865 when the ITU was created. It wasn’t until 1903 that the Wright brothers flew for the first time. Henry Ford started producing cars in 1908. John Logie Baird’s first public experiments with television were in 1926. In this world, representatives would take days to reach a meeting, and news of what they discussed and decided would take just as long. They had to be given full power in order to be of any use.

But the Plenipot name, and the fact it goes on for three weeks, is just scratching the surface of ITU arcanery. The election process is, by all accounts, so bizarrely out of step with the 21st century that it takes on an almost surreal air.

This is the rundown for the SG election. It has been pieced together from the recollections of those who were there, most slipping in and out of consciousness.

There are, roughly, 196 voting countries. Every representative is given a special pen (I am trying to track down a picture of this holy scribing instrument), and a special ballot paper, and a long series of instructions. You must mark a cross, and only a cross. It must not stray beyond the borders of the box provided for the cross. Disobey any of these rules and your vote will be discounted.

Oh, and you’re locked in. You can’t leave the room. Actually you can but you won’t get back in if you do. A lot of attendees bring some food and drink in with them.

Before you vote though, you have to wait for every single government entitled to vote to be read out – all 196 of them. In French. Okay, that’s done, now vote. No, hold on, Japan has two ballot papers. Everyone stop. Okay, we have taken one ballot paper away. Leaving Japan with two minus one ballot papers, which is one. One ballot paper per representative. Okay, we are set. Begin.

No, stop. Malaysia doesn’t have a ballot paper. That must be why the Japanese had two. Hang on while we give a piece of paper to Malaysia. Malaysia, do you have the special pen? Yes? Okay, everyone vote. No, no, wait, hold on, Denmark has done a tick instead of a cross (the pressure must be terrible). Everyone stop. Get Denmark a new ballot paper. Denmark, do you have the special pen? Yes? Ok, everyone vote.

Well this is finally done, all the votes are then put inside the transparent voting box. The transparent box is actually new: it used to be a wooden box flown in especially from Geneva and sarcastically nicknamed the Ark of the Covenant by world-weary delegates. Hang on! France! France! What are you doing? You have folded the voting paper the wrong way. Yes, friends, there are specific instructions about how to fold the ballot slip. 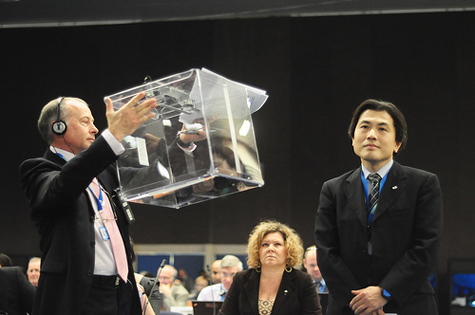 Once all this is finally done, the names of all the countries are read out *again* in full and in French. The box is taken off to a special Green Room for counting and the empty box is paraded around the room in a depressing effort at showmanship. Look at the see-through box, all the papers have gone. We are now counting them. In the Green Room.

After counting, the election procession comes back in and after a bit more pomp and ceremony the results are announced. If no one reaches the required majority – typically 79 – the process is repeated all over again. Sometimes the next morning if it’s getting late by this time.

This process is repeated five times for each of the five available seats. But here’s the real crunch: three of the five posts only had one person standing.

So let’s get this in context: the ITU is the organisation that develops and decides the standard for, among things, satellite communications, television and cable, DSL, telephones, digital video and many, many other cutting-edge tools of the modern world.

The truth is that this could all change extremely quickly if there was the political will and if there wasn’t huge cultural inertia to getting rid of these worthless symbols of the past.

But what makes it all the most incredible that such a pointless and time-consuming ceremony is incorporated into the ITU’s make-up is that in other respects, the organisation is at the cutting edge.

It puts out roughly one new standard a day every day, every year. It recently decided on the latest video codec H.264 – used in the iPad and a lot of the new software applications. It also approved a universal mobile phone charger, which is gradually coming in effect. And these are just the ones that get attention. Many more are allowing the modern world to zoom along completely oblivious. 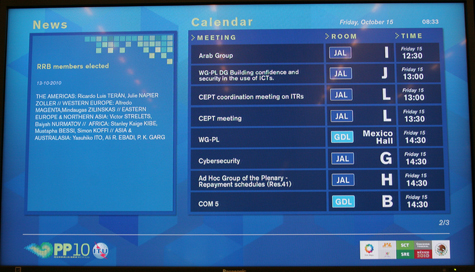 Administratively the ITU is extraordinary – turning around dozens of documents every day, translating them into five languages and getting them out again within 24 hours. Dozens of meetings are coordinated swiftly and efficiently, and ad hoc groups are given extraordinary freedom to create new groups and have them pulled into the overall schedule at a moment’s notice.

The conference itself is extremely well organised and run (although the Mexican government and the state of Jalisco did supply the resources). The staff and other organisers are professional, accessible and helpful. A huge number of ideas are raised, discussed, edited, re-edited, put out for discussion, revolved and approved in tight timeframes and with a general sense of calm.

So, why are people so annoyed with the ITU? And why, in the Internet community at least, is the organisation a byword for malicious intent? Well, to understand that you need to meet the representative from Syria, a Mr Nabil Kisrawi.

But more later about Mr Kiswari, self-defeating ITU discussion rules, the “Big Boys” and their units, and young women in leather mini-skirts at the steak restaurant. It is Sunday afternoon which means of course people are still meeting. After all, you’ve only got three weeks.

Actually, I think there are very good reasons for using paper ballots in these elections and I don’t see why the ITU should have to rely on the sort of game show nonsense you see on TV. Electronic voting systems are infamously flawed and I can well understand national governments not wanting to rely on them in a context like ITU. Apart from anything else, government A might feel decidedly uncomfortable using a system designed, manufactured and sold by a company in country B. Paper and pen systems are harder to attack and easier to audit.

But don’t take this comment on voting mechanisms as support for the way ITU operates in all contexts.

It is not about mr. Kiswari, I think.
It is is about all governments, and lack of direct representativity of other sectors.
It is about ITU trying to mantain the status-quo.
In Internet Governance, what we need is multistakeholderism.

For me who’ve known the ITU-T only through its published standards, I find this to be a fascinating read. Keep your posts coming!

I just re-found your story as it was published in The Register and the caption in one of the pictures noted “Don’t miss ‘Ad Hoc Group of the Plenary – Repayment schedules (Res.41)’ — it should be a kicker” – thank you for the laugh. As one of the main participants, I can assure you the meeting was indeed a kicker. Really. The implications could have had disastrous implications all over the UN system…