In the 1990s, on Channel 4 in the UK, the Pakistani team game Kabbadi was shown Sunday mornings for several hours. The only explanation can be that the broadcasting rights were cheap.

Kabbadi is a silly but oddly fascinating game. A bunch of middle-aged, overweight men stand at opposite ends of what looks like a small beach-volleyball court (without the net). One man steps forward from one team (the attacker); one man from the other team meets him. The first man has to get past the second to the other end of the court; if he does, he gets a point. If he fails; the teams switch, defense to attack and vice-versa.

The twist is that the attacking man has to constantly mutter the word “kabbadi”. The usefulness of this is that it naturally limits the time the attacker can spend trying to find his way past his opponent – because he runs out of breath.

At the ITU Plenipot, they have their own version of Kabbadi called “Chairman”. So long as government delegates say the word “Chairman” or “Mr Chairman” every ten seconds they can keep talking, and talking and talking.

The game is played by the same middle-aged, over-weight men, although they are dressed in suits rather than stripped to the waist. There are always two sides (although the team members vary). And they take it in turns to square up to one another and find a way to sneak past them. Just like Kabbadi it is very silly but oddly fascinating. 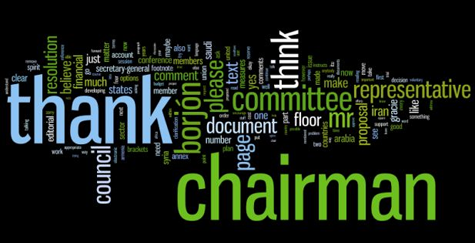 A tag cloud made from the Plenary transcript on Tuesday

So if you ever had any doubt that there are some entrenched and appallingly out-of-date government representatives in the ITU, it was wiped out during a discussion on budgeting restrictions.

Several large countries have reduced their contributions to the ITU. Both France and Germany went from paying the maximum 30 units to 25 units, leaving just the United States and Japan as the “Big Boys” paying full whack.

With each unit worth 318,000 Swiss Francs ($330,000), that means a reduction of $3.3million. Some of this was balanced with increases from others – Saudi Arabia and China for example – but the ITU is still down around $1.5million. And so it outlined different ways in which costs can be cut back, including cutting staff.

Incredibly it was the very last cost-cutting measure that was the focus of debate. Measure number 20 suggested that it would be a good idea to: “Move, to the extent practicable, from present communications by fax between the Union and Member States to modern electronic communication methods.”

Currently communication between the ITU and its 196 192 members states is done both by fax and by email. Most of the governments find the piles of fax material an unnecessary hindrance.

However, a number of countries were appalled by the idea of moving away from fax machines. Almost as if it has been scripted, it was the same countries that have been holding up Internet discussions all week that spoke out against a move to email: Syria, Iran, Lebanon, Saudi Arabia and Senegal.

It is worth noting that these same delegates are the only ones in the room that do not have laptops. And it may also be worth noting that Syria had earlier insisted that the use of telex be included in one of the documents talking about IP networks. 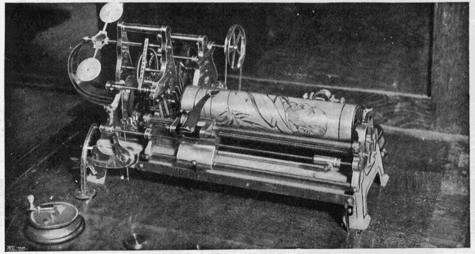 Quick! A message from the ITU is coming through

Now, you can argue back and forth about the state of networks in the Middle East and Africa, but the stark reality is that there are permanent representatives to the ITU – the body that decides cutting-edge technology standards – that are ten years out of date.

We all have a relative who won’t replace their ancient mobile phone or who can’t find the bookmarks in their Web browser, but usually they spend their time watching TV or pottering about in the garden. Very few of them are dictating global telecommunication policy at the United Nations.

You can almost taste the frustration at the ITU as they wait for these old men to retire so they can get on with bringing the organisation in line with the modern world. It will happen in the next few years, and then you can expect to see a huge raft of structural changes. Hopefully one of them will be a term limit on representatives and a removal of the position of “permanent representative”.

There are light moments in the day-long slog at the Plenipotentiary. We were treated to one yesterday when a representative from no less than the Vatican made an intervention in the middle of some contentious discussions about the Internet.

We were just about to embark on a ludicrous discussion about whether to include a footnote to a document that named several Internet organisations, including ICANN, RIRs, IETF, ISOC and W3C.

For reasons that are as petty as they sound, the Old Men do not want to recognise the existence of ICANN – with whom the ITU has had a long but increasingly pointless rivalry.

Although they will occasionally bark out furious declarations. “Do not surrender to the ICANN!” yelled Syrian representative Nabil Kisrawi at one session, leading to bemused looks from the rest of the room. Later on, he exclaimed “there is even a representative of the ICANN in this room!” as if it was the greatest provocation known to man. Sadly he was wrong, there wasn’t.

So it was with calculated bonhomie that the representative from the Vatican asked for the floor and proceeded to congratulate Iran for the recent approval of the country’s top-level domain “.iran” in Persian.

The new, multilingual domain was a great example of the successful relationship that the Iranian government, among other governments, had forged with ICANN, the Vatican continued, and a demonstration of the best way forward, with different organisations working together in the benefit of all.

The intervention may have come from one of god’s representatives rather than the Big Man himself, but it was nevertheless divine.

The most frequent and significant criticism of the ITU is that it is a closed shop. Only governments can get in. Others get limited access but only for a big fee. You can’t even read its documents. A shadowy organisation that thinks it should run the world while making deals in smoke-filled rooms.

The reality is quite different. Parts of the ITU are indeed closed. I registered for the conference as a member of the press and entry was free. But, crucially, that did not give me access to the conference documents.

Everything at the Plenipot revolves around the documents. Without them, you have no idea what anyone is talking about. Even with them, it is a struggle. There are at least five different categories of documents, all numbered but with different prefixes: C, DL, TD (also DT), INF, ADM. Some documents are simply lists of other documents in an effort to keep people following events.

Without the documents, you might as well as be sitting at the back of a bingo hall. Without a card.

It is also the case that unless you are an official government representative or a representative of a “sector member” – which costs anywhere from $10,000 to $100,000 – you cannot get into the conference centre. So, yes, this is a closed meeting.

But much more importantly, the *culture* of the ITU is surprisingly open. Once you are in the door, the atmosphere is very relaxed, even collegial. The elected officials are happy to talk to you, friendly and open. Their interactions with the room are honest to a degree I have rarely seen in either the public or private sector.

The official rules are such that many of the meetings could be closed to me – and to sector members – but these rules are ignored. The only security is at the main entrance; from there you can wander about as you wish.

What is even more stark is that as you walk in, all the staff’s offices are lined up on the right-hand side, opposite the main hall, with name plaques above the door. The doors are always open as a default. I have stuck my head in one or two and each time have been greeted with a helpful query as to how they can help me.

I promised myself I would keep comparisons between the ITU and ICANN to a minimum, but in this case, you can’t help but be struck by the disparity. At ICANN meetings, the staff is purposefully hidden away in a corner of the venue, all in one room. You are not allowed near the room and if you put your head in – even as an ex-staffer – you are met with a challenge to explain yourself. Open and engaging it is not.

But what you can’t do here – and what the ITU really needs to look at – is provide input to a meeting, even in the smaller discussion groups.

It is peculiar that sector members – signed up, paid up and a part of the organisation – are not allowed to talk. Even when the subject is their specialist area. Only member states can interject. This is stupid and everyone knows it. In fact, the restriction is widely skirted by governments who just name non-government employees as delegates so they can speak, but this is a fudge that can only ever be temporary.

If the ITU is serious about opening up to more sector members i.e. non governments, it has to allow them speaking rights. It already does that in its other meetings; the Plenipotentiary needs to lose its special status if the ITU’s promises to open up are to be taken seriously.

Did I mention that there are banks of several thousand pigeonholes – one for every delegate – along the side of the main room. I have box 1324.

I wandered around and located my box, hoping to find reams of faxed documents. With some disappointment I found it was empty. The Iranians must have got there first. 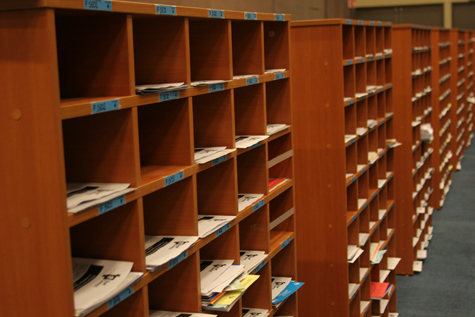