The decision will be critical. ISOC desperately needs fresh blood at the top and the appointment coincides with seismic shifts in the Internet governance field, thanks in large part to relevations by Edward Snowden of US government abuse of the Internet. 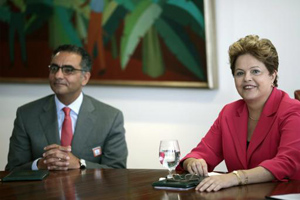 ICANN CEO Fadi Chehade has been taking a lot of heat in recent weeks over his signing of “the Montevideo declaration” – something has been perceived as Internet organizations declaring independence from the US government, although the reality is less exciting.

Chehade then held a public meeting with the president of Brazil, Dilma Rousseff, and announced there would be a conference on Internet governance in Brazil early next year. That announcement came just before the annual meeting of the Internet Governance Forum (IGF) in Bali – which is supposed to be where everyone agrees they will talk about the topic – and so created a storm.

The problem is not so much that Chehade said it – a lot of people have been saying the same thing in private for years – but that it was ICANN’s CEO. By all rights, it should have been ISOC’s CEO but then Lynn St Amour – who has been in the role since 2001 – didn’t want to.

Why? Partly because Lynn is naturally risk-adverse but largely because her advisor Markus Kummer was opposed to the idea because he fears it will undermine the IGF, an organization that he was mostly responsible for building in his former job at the UN.

However, St Amour and Kummer are wrong and Chehade is right, making it all the more important that the new ISOC CEO takes the ball and runs with it. That ball is the new “1Net” initiative which has been the focus of much excitement and jostling in the past week when formally unveiled at the ICANN meeting.

This 1Net idea is the right one so long as the Internet community doesn’t screw it up by turning it into yet another opportunity for navel-gazing. And ISOC is the best centre for the initiative but it needs a CEO that can take on the difficult task of driving it while resisting the urge to give themselves too much say (and profile).

ISOC has become too enveloped around the personality of its long-term CEO. When it should have been engaging the broader world and leading in topics such as the SOPA legislation, or online privacy, or most recently the NSA revelations, ISOC instead stayed too close to its tech roots and lived inside its own head rather than trying to serve the Internet society as a whole.

People tend to think because of the name “Internet society” that it was formed for the benefit of everyone online. But in reality it was created to act as a lobbying arm of the Internet Engineering Task Force (IETF). It should have grown past that role many years ago but the drive and mindset never existed at the top.

The situation has been changing in recent years – ISOC, for example, has finally started taking its worldwide chapters seriously and affording them real respect. But now it needs a new CEO that will take that and amplify it 100 times.

Which leads me to the candidates.

Update, Wed 20 Nov: I have it on good authority from a number of different sources since this post was published that my line-up of final candidates is off the mark. Only one of the four listed below is still in the field, although all were apparently carefully considered for the role. As to the other two, people remain very tight-lipped.

A lot of names have been bandied around – almost all of them current leaders in the Internet governance field. In that sense it is a repeat of the relatively recent ICANN CEO search. ISOC is even using the same search firm, Odgers Berndtson.

As far as I can make out though, here are the four most likely to be in the final three (if that makes sense):

As CEO of UK Internet operator Nominet and recently chair of ICANN’s ccNSO, Lesley knows everyone in the Internet governance field and has some allies within ISOC and immediately surrounding it. She was unsuccessful in the ICANN CEO job, but the criteria for that job were very different.

Lesley may be a controversial choice however. Nominet’s Board continues to be engaged in a fight with some of its members and unflattering details about how she dealt with accountability issues as well as complaints over the organization’s actions are in the public arena.

Raúl is a big name in both Internet governance and ISOC circles. He comes from an engineering background (as opposed to government or business) and has been involved with just about every important Internet governance situation since then. He was a member of the Working Group on Internet Governance (WGIG), chair of the NRO, CEO of LACNIC and, crucially, chair of the Internet Society (ISOC) for many years.

Raúl is also highly respected, especially in engineer circles and in Latin America. So if people have started looking to Latin America for the future of Internet governance, he would be a good bet. His plus for the job is also his minus: a huge amount of knowledge and experience within ISOC.

Janis is currently an Assistant Director General at UNESCO but has remained closely linked with the Internet governance world following his tenure as chair of the Governmental Advisory Committee (GAC) of ICANN and his key role in the World Summit on the Information Society (WSIS). He has also been a regular face and speaker at the IGF.

Janis’ big advantage is that he is enormously capable, gets the job done and yet no one has a bad word to say about him. I should include myself in that – and I have badgered Janis more times than I can recall. He would lend ISOC weight and experience and international respect.

Walda is pretty much everyone’s favorite Internet governance person. Which is unusual for someone who has worked at the FCC, the White House and National Public Radio. She’s also worked closely with the ITU, and sci-fi geeks love the fact that she is on the Board of the Arthur C. Clarke Foundation.

More importantly for the ISOC job, she has been the organization’s COO for a number of years and been behind its transformation from an insular and often quite weird organization into an expansive and outward-looking one. Unusually for the Internet governance world, Walda is also happy to have a low profile so long as she can get on with the job. That means the ego-clashes that have been behind much of the Internet Society’s larger problems can finally be dispensed with.

So that’s my take on where we are with ISOC CEO job. We’ll find out soon what the result is.

The right person could make ISOC a real force in defense of the Internet and Internet users. The wrong person would become a big fish in a small pond but risk maintaining the organization’s impotence in the wider world.

Interesting read, i agree ISOC CEO appointment is critical for the future of Internet Governance and Multi-stakeholder model in operating the Internet technical infrastructure in General.

The Technical community needs to step up to the challenges of new Internet where Government has a considerable more power and involvement in the Internet Governance issues within their jurisdictions and globally .

Write a follow up to this post by updating it and commenting on ISOC new CEO appointment when its done.