I’ve written a story for The Register about a new report [pdf] regarding the Whois system for domain registration data. We all knew that Whois was a mess, but it’s good to have some facts and figures that show what a mess it is.

Here’s hoping this gives the endless, intractable discussions within ICANN about Whois a bit of a kick. I’m hoping Maria Farrell will write something about this report – she saw several years of her life chewed up trying to make some progress on this issue. Oh, I should also thank Jenny Kelly from NORC who was incredibly responsive and helpful.

So I’ve written my first news story is what I think is three years. It’s on The Register and is about Oversee’s auction scandal following a discussion with CEO Jeff Kupietzky at Domainfest last week.

I held off journalism while in my job at ICANN – mostly because I didn’t have time. This is a tentative return to be honest because you can only go so far with freelance journalism, and I’d had five years of it. In fact, I was about to get a job with a big media organisation and start on some kind of career ladder when I was offered the ICANN gig and went with it instead.

As to what I plan to do with myself: I have two business plans and two books in the offing and I’m doing some consultancy on communications, social networks and a little international politics (I am available for hire btw – just shoot me an email). But there’s something I really like about the straightforwardness of journalism. Turn up, ask questions, share what you learn and thrown in a bit of analysis. It doesn’t pay well but I love it.

I’m actually thinking about pitching a feature on Kupietzky, who gave a very interesting keynote last week and is an interesting character. Particularly since domain names are inevitably going to become more mainstream in the next few years.

How much do you love.info?

I just got the results for the Domainfest first-day auction, described as “very strong” by Oversee’s main on the ground, Mason. Certainly looks better than last year, which was a bit of a wash-out. Is this another sign the economy is finally picking up?

Anyway, of 73 domains, 49 were sold totaling $150,950.00. It’s good but it still seems under-par. Oversee’s CEO Jeff Kupietzky alluded to this in his opening speech. Jeff believes that this is early days, that the world of domains will explode some time soon, like a real estate boom.

Maybe he’s right; maybe he needs to persuade himself he’s right, with a portfolio of one million domains that will cost over $5 million a year in holding fees. I’ll ask him tomorrow morning.

Here’s a random selection of domains, prices and mindless comments from me from the list:

Just an update on my previous post – Adam Epstein from AdMarketplace won the first round of the PITCHfest. 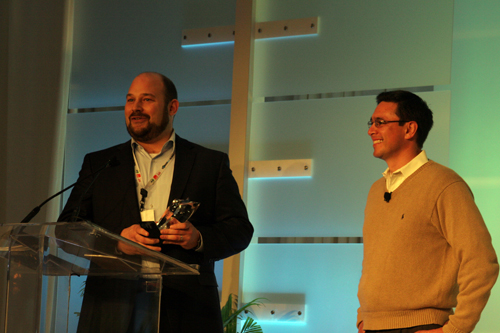 The winning idea – pubMarketplace can be found at, well, pubMarketplace.com. There is a flyer in the Domainfest bag about the service.

It advertises itself as “Bringing the Power of Search to Content Publishers” and offers the ad tag cloud that he showed off during his presentation.

Whenever you hear editors decrying the death of newsprint – and the Guardian’s Alan Rusbridger did exactly that this week – there is always someone who points out that online advertising has jumped x percent in the past year and is now worth xx billion.

And the response is always: but that remains only a tiny percentage of overall advertising. The online world is here, it’s coming, but it’s not enough to sustain the system in place.

Well, online advertising may not be fully matured but it not for a lack of energy or innovation.

I’m sat in the chandelier-filled Starlight Ballroom in the Fairmont Miramar Hotel, Santa Monica, attending Domainfest 2010, and on stage are five sages of the online advertising world dissecting a business model idea put to them by an eager young domainer.

As conferences go, Domainfest is a pretty exciting one. It probably has something to do with the average age of the attendee (24?) and that the industry it seeks to cover is a fast-moving, ideas-filled world.

I’m off to Domainfest 2010 in Santa Monica this morning, hampered slightly by a dreadful cold.

Should be interesting – this morning they are experimenting with almost a TV format and having people pitch new product and service ideas for increasing website traffic and revenue to a panel of experts who will tell them what they think.

And this afternoon a discussion about the big beast – new Internet extensions of generic top-level domains – and what they might mean. It’s titled: “New gTLDs: Bonanza or Bust?”

Then there’s a domain auction that I can’t decide whether to go to or not. May need to come back home and get some rest.

Here’s what happened at last year’s Domainfest in Hollywood.

I’ve just submitted a response to an ICANN public comment period asking for feedback on a model that would allow people to send in “expressions of interest” for new Internet extensions like dot-com or dot-info.

Broadly, ICANN is putting a system in place that would allow anyone to apply for their own Internet extension (known as a “generic top-level domain” or gTLD). So long as you follow the rules you will be granted one. As you might guess, this is not a simple process to put in place and so after a few years of work, we are currently at the stage where there are a few issues left to decide and the organization is looking to gather as much information as it can on those that are going to apply so it can prepare.

The reason I’ve sent in a response is because I think its latest model of asking people to send in “expressions of interest” for new extensions has a few flaws that could cause further delay and problems. I also think the organisation itself needs to re-evaluate its approach to risk. So I’ve sent in my thoughts and outlined suggested changes along with my rationale. I look forward to seeing how ICANN responds – here’s hoping the organization has got better at demonstrating that it reads people’s responses.

Anyway, response is below and on the ICANN website. For more information on this particular part of the new gTLD process go here. To see others’ comments go here. To send in your own response, go here and go to “Add Comment”.

Google Voice and the rise of locationless people 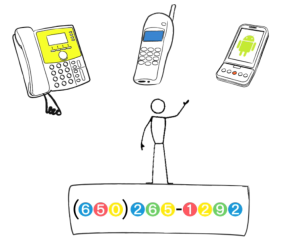 Although that appears to be a San Francisco telephone number, what happens is that I am able to cause that number to redirect to whatever other numbers I want – which means that I am now longer wedded to a telephone number and I don’t have to constantly update people when I shift home or mobile phone suppliers or numbers.

The service is quite interesting although far from perfect. Someone calls it, it rings a few times and then asks them to leave their name to see if I’ll answer. It then rings me and I can decide whether to accept the call or not. What is quite good is that if a message is left, Google Voice automatically transcribes what is said and then emails and texts me the transcript (so far, I would give the transcript accuracy 7 out of 10).

If you don’t use Twitter, that headline will look like gibberish, but basically one company that produces very short URLs has given up and publicly conceded defeat to a more popular service.

What’s annoying is that I have been happily using the loser – tr.im – and been enjoying the stats it produces. No more – the stats are gone and the ultimate display of the risk of fast-paced information becoming dead information, the short links will stopped working at the end of the year.

Here’s what is on Tr.im website at the moment: “tr.im is now in the process of discontinuing service, effective immediately.

“Statistics can no longer be considered reliable, or reliably available going forward. However, all tr.im links will continue to redirect, and will do so until at least December 31, 2009. Your tweets with tr.im URLs in them will not be affected.

“We regret that it came to this, but all of our efforts to avoid it failed. No business we approached wanted to purchase tr.im for even a minor amount.

“There is no way for us to monetize URL shortening — users won’t pay for it — and we just can’t justify further development since Twitter has all but annointed bit.ly the market winner. There is simply no point for us to continue operating tr.im, and pay for its upkeep.

“We apologize for the disruption and inconvenience this may cause you.”

Interesting that even in these heady hype days of Twitter than no one would pay for Tr.im. Ah well, like the note says, now I’m shifting to bit.ly. I wonder how long it will be able to provide the service before desperately seeking funds.

So everyone and their dog knows about Twitter. Now the problem is they have started using it – and you can see it through the pretty drastic impact on third-parties the past two weeks or so.

Services you use to make Twitter more manageable keep getting knocked offline. A few months ago Twitter itself was suffering from the attention and keep falling offline. It was at an inflexion point – it had grown so much that it needed an influx of money to build the system to deal with the demand. And that’s when the likes of Google started offering to buy it – leading Twitter’s owners to (somewhat stupidly to my mind) outright reject any suggestion of selling their company.

Twitter got some money and hired consultants – one of whom I know – to help them deal with demand. They shifted to the same style of server spread and backup that Google and Facebook use.

That wave has passed but now the third-parties are having the same problem. Tr.im – which allows you to stick in a long URL and get a short one out (which is ideal for those 140-character-only tweets) – has been falling offline repeatedly in the past fortnight. It’s got so bad that I’m ready to shift to a different company. And today Splitweet – which allows you to post to multiple Twitter accounts – also went offline. It popped up an hour or so later saying it was under a denial of service attack. As of writing this I still can’t use its service.

The same is happening with other third-parties. SocialToo is running slow. And Twitterfeed keeps timing out while I’m trying to create an account with it because I can’t use Splitweet.

All this means that, after Twitter itself hit the wall and pushed through, that the third-parties feeding off this service’s success are also about to hit that wall. They are going to need money to maintain their (free) service. Who is going to stump up that money? And to which service? Should be interesting to see which services people think will be able to provide a return on investment, and which will fall by the wayside.

Read More... TwitterTwitterBlogs and blogging
← Back Next →