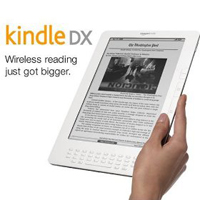 I love my Kindle. It really is a great machine. The Kindle 2 made all the right changes to the original Kindle, which is why I forked out a hefty $359 for it. It contains literally thousands of books – which has completely changed my reading habits (more reading, less lugging around of books). It is glorious and if you are a serious book reader you should invest in it.

Now so sure at the moment though about a new Kindle that Amazon just announced – the Kindle DX. It’s the same as the Kindle 2 but with a much bigger screen – just a little smaller than a magazine. I get the logic straight away – a bigger screen is much, much better for reading on. Particularly if you are reading PDF documents or magazines. It doesn’t matter with books – you want something you can shove in your bag and pull out.

But clearly Amazon has found out that alot of people are using their Kindle to read documents – probably work documents – on a device that doesn’t have a backlit screen and which doesn’t require you booting up a computer. I can see the logic, although I’ve not go into this habit yet.

As predicted yesterday, Amazon has just announced the second version of its Kindle e-book in New York this morning. You can read the official announcement here.

It will cost $359 – still very expensive – and will be available from 24 February. If you are based in the United States, you can pre-order one now. I just have.

The Kindle 2.0 out tomorrow?

One thing I’ve always disliked about US tech journalism is the willingness to get drawn into corporate hype to the extent that even the possible news of a new product is deemed worthy of news articles.

But that said, it does look as though tomorrow in New York, Amazon will announce a new version of its ebook reader, the Kindle. And, I have to say, I am looking forward to it for the simple reason that the Kindle is what will finally break the ebook barrier to mainstream use and that will bring with it a fantastic revolution in book and information consumption.

A press conference is being held at the Morgan Library and Museum (although I haven’t been able to find an official press announcement of it), and in the past week pictures of a new Kindle have leaked out onto the Net (which is hardly surprising as to do such a big launch of a new product, the images would have had to have gone through at least one PR agency and have a wide distribution internally). I’ve grabbed the pictures and posted them below.

According to online reports, the expected launch date is 24 February.

Can someone please get to the ebook reader before Apple

I’m quite excited about the fact that Amazon has brought out a new ebook reader that it calls the Kindle. I haven’t seen one in the real world but I am assuming with the effort they’ve put behind it that the screen technology is what it claims to be – easy to read without straining your eyes.

I believe ebooks are the inevitable future. It’s just another step along the digital revolution. But – and what a but – have you seen the state of the “Kindle”? It looks like a prototype. A prototype designed by 18-year-old students back in the 1980s. Here is good technology and big demand with crappy design – i.e. the perfect opportunity for Apple.