That Eddie Izzard is an interesting bloke

Is this a flower reaching out of my Bird of Paradise – or just another leaf? One of the things…

The reason American beer is so bad

So one of the many questions rolling around my head, particularly since living in the United States, has been: was is American beer so bad?

It really is bad. I know Brits get mocked for flat, warm beer (I love it – taste is terrific), but American beer – your Coors, Buds and Millers – really is absolutely dreadful. Tastes of nothing at all, doesn’t refresh or quench. Just about the only thing it does is get your drunk if you can stand to drink enough of it.

Well, I have found out the answer. There was a History Channel documentary on US brewing history at the weekend and it was easy to define from that this peculiarity that an entire nation loves drinking rat’s piss while everyone else in the world has spent centuries savouring their beer.

And this is the three-part answer:

We first learned that the domain name market was far from stable around eight years ago when the dotcom crash turned a booming market into dust in just a few months.

Over the years, that market has grown in strength: its stability saw people invest in advanced systems for buying and selling domains, and the never-ending demand for Internet sites, coupled with the fact the the number of top-level domains stayed the same and so the domain space became smaller, meant that prices increased steadily to the point where tens of thousands of domains became worth tens of thousands of dollars.

Well, the DOMAINfest domain auction has just demonstrated that the domain name space may be more stable but it ranks alongside art, rather than houses, when it comes to property.

In short, the auction was a bit of a wash-out, with none of the 200+ domains available exceeding expectations; most hitting the bottom-end of their estimated value; and a very large number meeting no bidders and being pulled off the floor.

I’ll be taking pictures at DOMAINfest today and sticking them on Flickr – and possibly here – with a CreativeCommons license (free non-commercial use; accreditation required). The stream is below:

One of the bizarre but wonderful things about living in Los Angeles is that when all your friends are freezing cold or trapped under the snow in January, you get to walk in the sun and witness the most extraordinary sunsets.

Last night I saw the makings of an extraordinary sunset and jumped on my bike to Venice to get some snaps. Here’s one and under that, a Flickr feed of the rest: 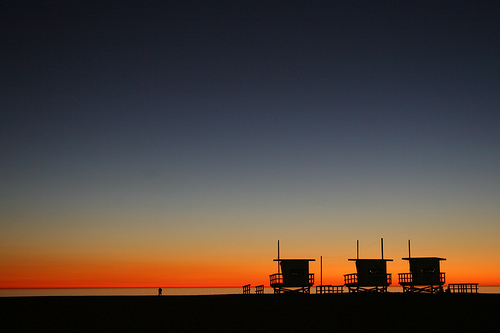 Too much bloody work

It’s been six weeks since I last posted here. That can’t be good. And I have a ton of stuff to get out of my mind through my fingers. The one-day trivia brain of Los Angelenos; the US presidential election process; the insane bureaucracy and mind-control of this peculiar and remarkable country. Plus, lots of pics – some with world famous stars of the screen. And the tale of trying to get hold of my possessions after 16 weeks now.

Why is this material still in my brain and not on the page? Because of work. Too much work. Far too much work. This job is a constant invitation to burn-out. I think it is the three international meetings a year that is what really makes the workload impossible: there is never more than a week in which you can get on with all those things that need quiet periods to get done. I thank god that the cycle ride home (along the beach – it’s nice, even in crap weather) is 35 minutes. It’s the one conscious hour of the day I can’t be at my laptop. Although I did take two phonecalls on my way in this morning. How long before I’m balancing the Dell on my handlebars, trying to pick up WiFi signals from the beach houses?

You should read this blog post before you delve into this piece.

A brief visit to ICANN

I’m currently in San Diego finishing up my research on the Sex.com book. And I figured that while on this…