The California Poppy is a beautiful thing and once of its remarkable features is that it closes up tightly when it is cold or overcast only to spread out delightfully when the sun beats down.

This project’s aim is to recreate, if not the California poppy, then a beautiful flower opening its petals as a ceiling fan.

Ceiling fans comes in all shapes and sizes, many of them not attractive. But there is an element of style and design in many fans and when you have something so prominent in a room, people will frequently go to some length to find a style they are happy with. My person favorite is probably the classic Hunter fan (see below). It’s beautiful in an industrial, functional way.

But fans can be much more. And while trying to figure out what size of fan would look best in our lounge, the idea of a fan-as-flower occurred to me.

Story behind the idea

We have been thinking about installing a fan in our lounge for some time. Because we have exposed ceiling beams, we do not have an attic and as a result when it is sunny, a LOT of heat builds up in the ceiling of our lounge in particular. A fan would move the air and cool the house. And look good to.

So we looked and found a style we liked. Given the size of the room, a 68-inch was probably the best bet in terms of ability to move large volumes of air. But would it look too big? To answer this question, I mocked up a cardboard version of the fan, supported by some strips of wood and pinned it at about the right height and the wife and I took a step back. It was WAY too big. So I cut the cardboard fins done to the next size – 54 inches. It looked better. We had our fan size.

After dinner, I was in the lounge reading a book with the sun setting and light shone in through the windows and across the ceiling. The cardboard fan was already in bad shape: the fins had started folding over and dropping down. But considering this was a clump of duct-taped collapsing cardboard, it looked peculiarly beautiful, as if it were a large flower bud that had gently gone to sleep for the night.

So that was the germ of the idea: why not have a ceiling fan whose fins fold down when not in use. When in use, the centrifugal forces cause them to lift and rise up. That could be really beautiful – a flower that blossoms.

Not an entirely original thought 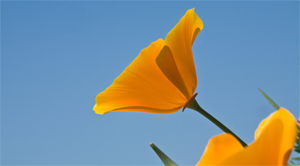 Of course a small amount of research later and it becomes clear that I am not the only one to have thought of this. There are a number – although not that many – of fans to mimic exactly this action. Some even have videos (see one below).

But from what I’ve seen, not of them are particularly beautiful. They are quirky or a novel style but none of them have that wow factor. Some look downright cheap. I sense a real opportunity here to make a truly beautiful fan. And to use nature i.e. real flowers as the inspiration behind a new design. There is an example of a beautiful flower opening in a video below.

So the next step is to find some suitable flowers whose shape and petals would suit a fan’s mechanical function (a fan, after all, still has to move air or it is worthless). Then research materials that can help capture the beauty of petals. A key element will then be the mechanics that create an unfurl that makes you want to keep turning the fan on and off just to experience it – like the first time you tried a hydraulic CD cover, or moved your finger across an iPhone.

I can easily see a high-end market for a fan that captures that level of beauty, especially if you build in some gentle lighting (one big downside of many fans is the ugly appendage that is a light fitting).

Not exactly beautiful. And the cheap plastic fins don't help.